Adam Pagor from Grain and Hearth back in our Test Bakery! 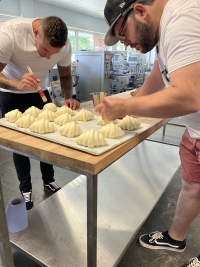 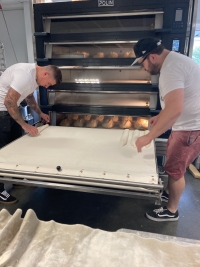 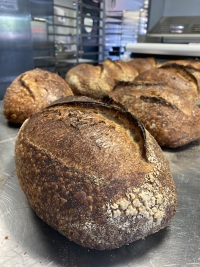 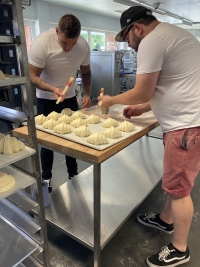 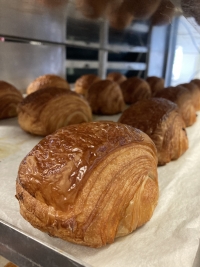 This month we were joined by Adam Pagor from Grain and Hearth in our Test Bakery, trialling the Polin Stratos XP oven with Ben Richards from THIR13EN Catering. Adam started his first baking business in his small home in Greenwich, so was the perfect fit to help Ben begin building his experience in baking.

THIR13EN was co-founded by local couple, Ben & Isabella. Their drive and desire to pursue THIR13EN started in 2019 during their travels in Asia & New Zealand, knowing that they wanted to start something new together when they returned home. They became inspired by how local communities could use the ingredients around them to create amazing tasting food. Ben has been a chef for 14 years working in and around Exmoor area, which shows in his passion for provenance and the use of seasonal local produce and getting the opportunity to extend his skills to baking was one he couldn’t resist.

Having Adam in the bakery felt even more exciting, given the last 18 months we have had. Despite not being able to use the Test Bakery for a while, it didn’t take long for Adam to feel at home. Across the two days, Adam and Ben made a number of bakes including pastries, cruffins, baguettes and sourdough, filling the office with the sweet smell of goodies, which was a smell we have all missed!

Watching Adam at his craft was fantastic and it is easy to see why his bakes are on point! Everything was done with ease which made learning for Ben straightforward. Ben said “Learning from the best is a privilege. The two days were brilliant and Adam made it look easy which is when you know they are great teacher!”

Everything was baked in the Polin Stratos XP and was one of the very first bakes for the oven. Adam is used to baking in a Stratos oven, but the XP was a new machine for him. Despite having not used it before, he got to grips with it quickly and was impressed with its functionality and the output. “The oven is great – bake is good. I love that the damper auto closes at the end of the bake, that’s amazing.”

He went on to say: “For 40 mins the oven stayed at the same temperature which is key for the bake. Plus having the different programmes which helps and an added bonus, saves time. Who can argue with that?”

Having Adam and Ben in the Test Bakery for a couple of days was fantastic and we enjoyed finally being able to fire up the machines again and get baking.

Want to book out our Test Bakery for a trial? We’d love to welcome you, give us a call today!

Hear about our news updates and equipment stock first